We Are Half Way There, Baby!

You have defied the odds by a long shot starting with your creation.  You amaze me.   You are strong.  I can’t wait to meet you for you are already a  remarkable person!
Here we are at 20 weeks.   We are half way there, Baby!
Keep getting stronger, bigger, stay healthy and safe and never forget…………Mama loves you.
You carry my heart since I have started carrying you.
Love,
Mama
This is a song that I love and I dedicate this to my teeniest daughter.
Posted by Mama Nic at 10:34 AM No comments:

A Little Bit of This and That

A day of cleaning, cooking, spending time with the family, sewing and organizing.....all done while wearing pajamas. 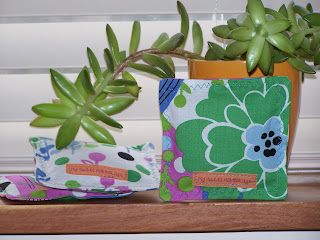 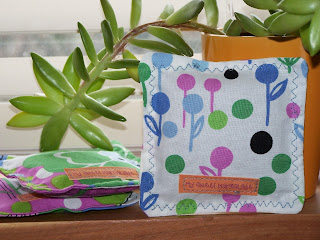 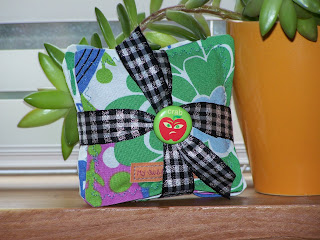 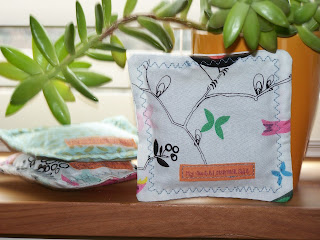 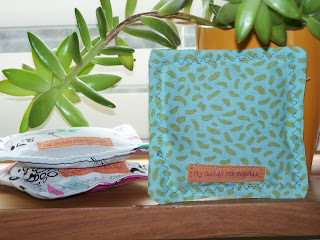 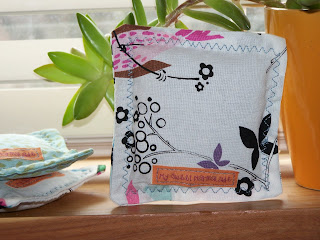 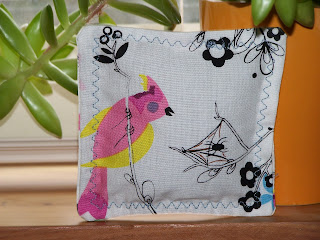 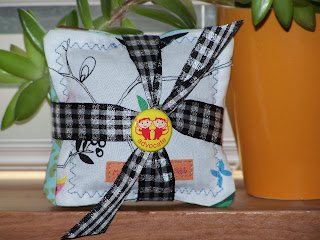 Happy Saturday!  I hope you are able to squeeze in something that you enjoy doing.
Posted by Mama Nic at 8:48 AM No comments:

Hop on over to My Sweet Marmalade's facebook page and find out the big news!  It is so exciting!!!

Don't forget to "like" the page to stay up to date on the latest announcements and promos too.
Posted by Mama Nic at 10:12 AM No comments:

Email ThisBlogThis!Share to TwitterShare to FacebookShare to Pinterest
Labels: baby, big news, gender announcement, it's a, My Sweet Marmalade

In case you are  curious about the soft marker for down syndrome that was found, you can click on this..... Chroroid Plexus Cysts
Posted by Mama Nic at 7:39 AM No comments:

Email ThisBlogThis!Share to TwitterShare to FacebookShare to Pinterest
Labels: chroroid plexus cysts, down syndrome, marker for down syndrome, ultrasound

The Picture of a Healthy Baby

Yesterday was a much anticipated day.  It was my 18 week level 2 ultrasound.  I was out sick from work most of the week suffering from a horrible cold and sinus and ear pain.  Feeling anxious and still sick, my husband and mother and I made the hour and a half drive to the hospital.

We waited an hour in the waiting room.  Every minute an eternity.  Finally my name was called.  The tech and I were talking about the reason I was here, which to remind you all is because I got pregnant on the Mirena (iud) and it was still in my body.  The doc did try removing it at 7 weeks but it would not budge.  So here I am to check on the baby's development and locate the Mirena and consult with a docter that was more experienced in these "high risk" situations.

Right away the tech says, "Oh Honey, you have to get that out!" That didn't exactly put my mind at ease.  "No ℅#*°£ and how do you suppose we do that now?" Is what I wanted to say.  Instead, I calmly told her that we had tried twice and couldn't.  The docs at my hospital advised me to let it be because the risk of removing it surgically had a greater risk of miscarriage than leaving it alone.  They also admitted to have never dealing with a case like mine and that is why I pushed to see other doctors at a hospital that had more experience.

Finally, the ultraspund starts.  A happy, moving baby.  Strong normal heart-rate.  10 fingers, 10 toes, nice spine, healthy heart, and the check list of measurements is going great!  We also find out the sex.  (To be revealed in another post) Relief at last!

Then locating the Mirena was not easy and took some time.  She couldn't find it so she called the docter in.  Finally, it was located.  Seems to have moved a bit from where it was before but was still embedded in the muscle of my uterus.

Before the next step, he goes over the ultrasound and they only found one tiny abnormality which will most likely correct itself.  It was a marker for down syndrome, but with everything else on the scan looking great he was 99% sure that it was fine.  With my last pregnancy the nuchal fold results came back borderline possibility that she could have Down Syndrome.  At the time that totally I thought my world would crash.  It didn't take long after the results for me to research and come to peace with having a child with Down Syndrome.  She was born with the normal amount of chromosones but if she hadn't it was going to be OK. I declined the nuchal fold exam altogether this time and the news if the 1% chance that this was something to worry about, did not phase me in the least.  No matter what, I would love and care for my child.

Doc suggests removing the Mirena now which totally freaks me out.  I was afraid of getting this far and seeing a healthy baby and now losing it.  We talked about how I thought the doc trimmed the strings to decrease risk of infection and it that was the case, we wouldn't be able to remove it.  The tech and doc left us alone to discuss the option of him trying to remove it today.  I was so scared and upset.I was there for a more experienced opinion and now I have it.  He suggests removing it now if he can.

I decided to go forward with the removal process even though I was scared out of my mind at what may happen and what pain I was about to have.  Things were tense but I know he was experienced at this and knew the limits.  It wasn't a get it out no matter what situation.  He would try if the strings were there and if he could pull it out he would.

The nurse came in and set up the room for the procedure.  Then we waited, and waited, and waited. A good half an hour went by before the doc came back with the nurse.  He explained what would happen and the nurse held my hand.  After a pain full exam, he realized that it was not going to happen.  Just as I had thought there were no strings.

So, we did all we could do.  I talked to him about risks, delivery, removal down the road.  I wish I had pushed to see someone here earlier and maybe I wouldn't still have the Mirena in.  What is in the past is done and cannot be changed.  I think I handled the situation the best I could with the information I had at the time.  I now have a healthy baby and we just have to keep on truckin'.  All and all a successful day but I am glad it is over.

Here is a quote from our wedding song, "More & More" by Rick Redington and the Luv.  I think it perfectly fits our life and our love,  and our growing family.........

"With each new day a whole new way

To find the love the light the way

You'll see in time, it all works fine,

To make the rhyme, we all must find


Happy Valentine's Day, Babe!  Love you...now and always.
Posted by Mama Nic at 9:31 AM No comments:

A Simple Vase of Flowers 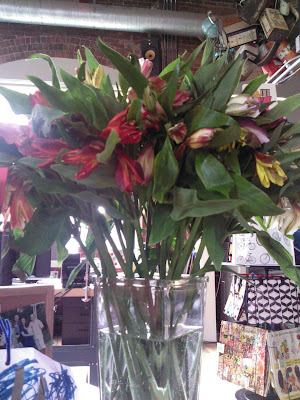 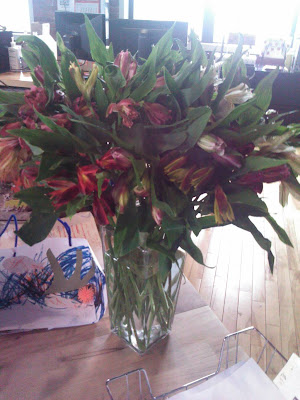 This surprise delivery made me smile.  I love having flowers around.  I was a florist at one point and can always appreciate a nice bouquet.

Published with Blogger-droid v2.0.4
Posted by Mama Nic at 9:31 AM No comments: 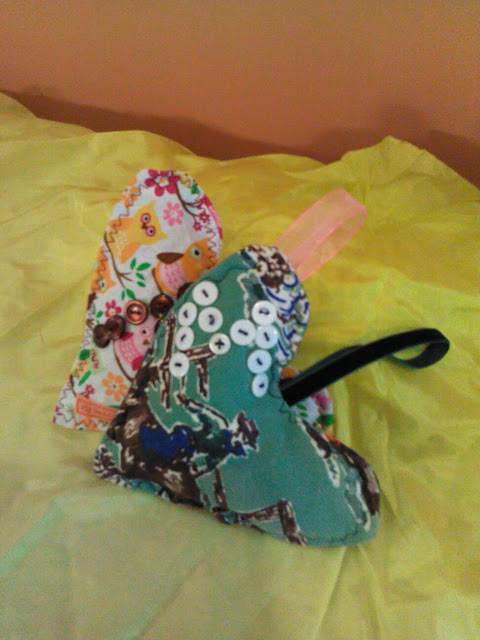 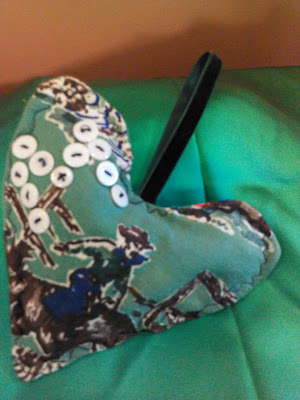 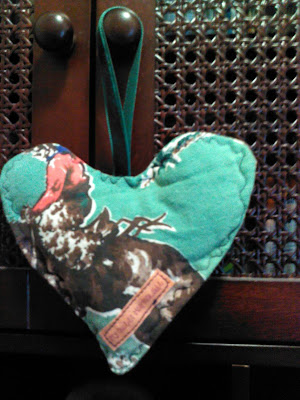 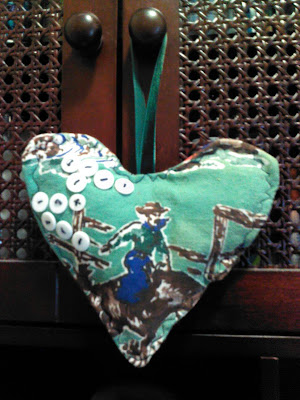 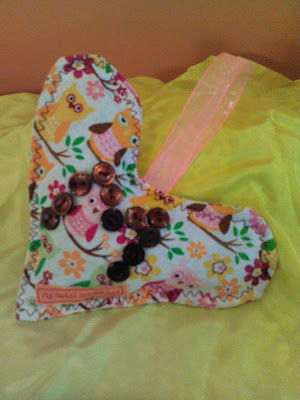 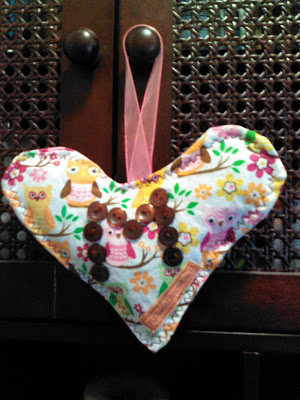 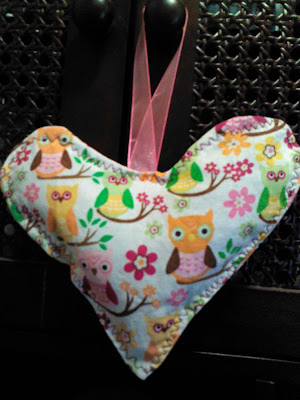 Here's a little peak at the hand sewn Valentine's gifts I made for the two kiddos that carry around my heart with them everyday.  They are filled with organic lavender buds and chamomile.  Owls for my lady,  and cowboys for my man.  Both have there first initial made of buttons,  and of course have a My Sweet Marmalade label. 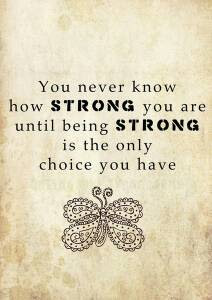 Published with Blogger-droid v2.0.4
Posted by Mama Nic at 4:45 PM No comments:

It's Friday!  Phew.  This was a looooooong week, my friends!   Was it for you too?  Many challenges and worries and scheduling difficulties to overcome.  Still working out most of those to tell you the truth,  but I am so happy that it is Friday I can't even tell you!  I am happy to be able to spend some family time and celebrate my Dad's 60th Birthday too.

I have had news in the last two days of  the birth of my friend's  baby girl and of a miscarriage from someone in a similar situation as myself on the Mirena.  I didn't sleep well last night and I am feeling super emotional today.  I am glad it is Friday.  I know I said that already but I just need some time at home to refuel, refocus on positive things and de-stress.

Here is a video that I saw a few weeks ago on a favorite blog of mine, Enjoying the Small Things.  It's beautiful motivational video and song that keeps me going....especially today.  I hop you enjoy.

The post I did earlier  today about my heart bouquet that my son made me,  got my wheels turning again about a project.  I thought of this idea when he was much younger and now that he is at the age that he comes home from daycare with tons of crafts and works of art, I think I need to get going on this idea.

By the way,  I love that he is making all these things now.  I love to see his creativity and ideas come to life.  I can’t wait for my daughter to get to that stage too but I am in no hurry to have her grow up fast.  I am sucking up last of her baby stage before she hits the terrible twos and thinks that she is little Miss Independence (although I am seeing this character trait more and more of her come through. She must feed herself, she must get her own shoes or boots to wear for the day, she wears a headband of mine as a belt almost on a daily basis…………but I digress.)
My thought is that I will keep the really special pieces, like for instance the heart bouquet in a chest,  but for all the other dozens of drawings and other crafts he does (all special to me….don’t get me wrong or I wouldn’t be thinking about this at all, right?) I will take photos of them  and make a photo book on Shutterfly.  This way I can keep his whole collection on one place and how fun would that be for us to look at when he is older?  Maybe I will catalog it by year?    Just brainstorming here as I write.  Hmmmm  I like this idea!  Now I just have to get going on it.
**and just a word on Shutterfly.  I love this site.  It is super easy to use and the quality is always great.  I have used this site to make tons of things, from photo books, mugs, blankets, calendars, and videos.   I am a Shutterflin’ Fool!   I have only had one issue on one page of a calendar I made and they sent me a new one out right away.  I also get terrific deals and promo codes emailed to me all the time.  May times I get things for next to nothing and rarely end up paying shipping.  I find if you can stay on top of your projects and them buy them when you get a promo that applies you save tons of money!  And no, Shutterfly is not a sponsor of mine nor did they pay me to say anything nice about them.  I am just sharing the love and some tips.  Hope you enjoy!
Posted by Mama Nic at 9:21 AM No comments: 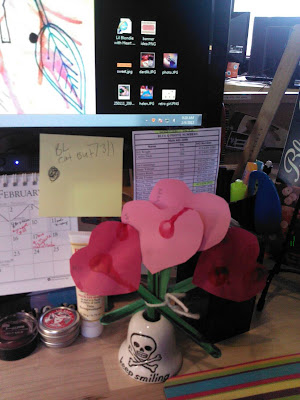 My inspiration for the day.....a heart bouquet from my son.  Love love love.  That is all that matters.

Buzzing Gardens and Dreaming of Spring!

New Esty Listing for the Girls!